The Bookseller of Kabul: Complexity & Contradiction 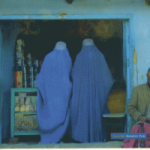 Like Rory Stewart, who wrote The Places In Between, Asne Seierstad came to Afghanistan two weeks after the fall of the Taliban.

However, her book, The Bookseller of Kabul, is a different kind of portrait of Afghans and Afghanistan than Stewart’s account of his walk from Herat to Kabul.  It is intimate, focuses on daily life, and the impact of family and social norms, especially on women  When Seierstad came to Kabul, she met and befriended a local well-known bookseller, Shah Muhammad Rais, and eventually lived with his sprawling family for several months.  The book is a slightly fictionalized version of the family, its interactions, and the family members’ views and experiences. Sultan Khan, the character based on Rais, is complex.  He is both heroic in his quest to protect literature and learning and a fairly despotic family patriarch, whose word must be obeyed, and who makes rash decisions to protect his pride.

The book is not without controversy.  Rais’ second wife, Suraia Rais, sued Seierstad in Norwegian court, and case was only resolved in favor of Seierstad last year, nine years after the book was first published.

To me, the most compelling parts of the book are the passages that underscore the complex and often contradictory nature of people.   Khan is an intellectual, yet he won’t let some of his children (including his sons) continue in school because he wants them to work.  He wants Afghanistan to be a modern country and yet has two wives, and literally makes every family decision.   Fiction or not, complexities and contradictions are real and they form the backdrop to any society’s reaction and relationship to change and upheaval.   For that, and its descriptions of Afghanistan and Afghans in the months after the fall of the Taliban, The Bookseller is definitely worth picking up.