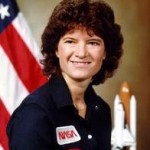 To me, Sally Ride was a hero, a trailblazer and an icon.   She made history as the first American woman in space as well as the youngest American to do so.  She literally reached for – and grasped – the stars.  So much has been written about her career and life in the last few days, and all of it reminds me of why she was such an inspiration.  She helped made science and space cool, and she showed us all that women can take on tough challenges and excel at them.  She was blunt, whether it was to question why there was so much attention to her as a woman astronaut, or her direct questioning of what caused the Challenger accident in 1986. She was unwavering in her devotion to science, math and technology education for girls and boys.  She was, in short, a great example of courage, determination and smarts – qualities that are important for everyone.