Sitting Down with Olympian Lorrie Fair: Reflections on Afghanistan 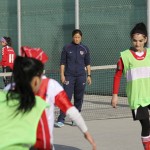 U.S. Sports Diplomacy Envoy, Olympian and World Cup Champion Lorrie Fair visited Kabul, Afghanistan over Thanksgiving to show her support for Afghan women, and particularly Afghan women athletes, who face cultural, economic and security challenges but are dedicated to their sport. While in Afghanistan, Fair hosted sports clinics and discussions to highlight the valuable skills athletes learn through sports such as teamwork, leadership and determination. She worked with the Afghan Women’s National Soccer team, as well as the Afghan Women’s National Basketball team, and spoke to a class at the American University of Afghanistan on the role sport plays in leadership for women.

I interviewed her as she was departing Kabul to return to the U.S.

Let’s start with the basics. Why is it important for women and girls to participate in sports?

Sports are a part of education, and they provide both girls and boys with the opportunity to develop skills that are important in life. Aside from the obvious physical skills developed from participation in sport, children also learn skills such as team work, leadership, overcoming adversity, being a humble winner and a gracious loser. Being part of a team is especially important for young girls as it can often influence and shape their lives. Studies show that when young women and girls participate in sports, they are more likely to stay in school, which may have an ultimate impact on their ability to be employed and be self-sufficient. Sports are about more than the game being played.

You’ve been in Kabul for several days. What are your impressions of the women athletes you’ve met and worked with here?

The Afghan women athletes I worked with at the sports clinics aren’t much different than young women I have played with all over the world in that they are passionate about soccer, and it is easy to observe that they are all capable, strong, ambitious female athletes. All they want is to have the right to participate in sports and have a socially safe environment to do so.

With that said, these women have overcome many challenges to be able to play soccer and are truly an inspiration. I see them as the pioneers of women’s sports in Afghanistan. It takes courage to pick up a soccer ball and play despite the possibility of threats or harm to themselves or their families. They have done just that and they stand together and support each other to be able to play.

People talk a lot about sports diplomacy. Why is it important?

When I first started working with young people around the world, I didn’t really see it as diplomacy. I only knew that sport is universal and transcends boundaries. Sport breaks down barriers in so many ways, barriers based on gender, religion, culture, nationality, and helps us gain an appreciation for each other as human beings. I was working with young people in North Africa, and one of the boys said that what impressed him the most was how the Americans treated them as equals. At that moment, I realized that sport can shatter stereotypes and destroy anything that serves to divide us as a human race.

How can sports convey values?

There are so many inherent values in sports that can be used in all aspects of life. The game itself is only a small part. Physical health and exercise, discipline, leadership, courage, goal-setting, dealing with adversity, coping with loss, overcoming failure, pushing mental and physical limits, listening and working with others, being a game changer, breaking gender norms, peacemaking… I can go on forever. Here in Kabul, one of the messages that I hoped to convey to these incredible women is that we will continue to support Afghanistan and the Afghan women in their educational and human rights goals from a civilian perspective before, during and after the military draws down. My short time in Afghanistan has been incredible and I have learned so much from this experience. Thank you so much for sitting down with me.