Mohtarama: Glimpses into the Lives of Afghan Women 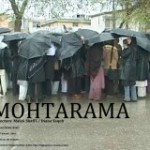 “What is happening with Afghan women?” is a frequent question. There isn’t one answer but the new documentary film Mohtarama provides some insight and context for any discussion of this question.  Shot in black and white by Afghan filmmakers Malek Shafi’i and Diana Saqeb, the film gives voice to educated Afghan women, the issues they face and their perspectives on being a woman in Afghanistan. It will likely surprise viewers and challenge their views of Afghan women as the glimpses into these women’s lives reflect sophistictation and dignity in the face of difficult social norms and daily indignities.

The film is shot in Mazar-e-Sharif, Herat and Kabul over the period of 2009-2011. The most familiar scenes may be of the 2009 protests in Kabul against the Family Law, which severely restricted women’s freedom, for example, making it illegal to leave their homes without their husband’s consent, and footage of the protestors and their hecklers. In many ways, however, the most insightful and moving scenes are the interviews with individual women.  In these interviews, these courageous women talk frankly about their lives, their frustrations and the future possibility of Afghan women coming together.  These interviews also reflect the complexity of women’s lives, as they talk frankly about their views and perspectives and the challenges facing them as individuals and as women seeking more power over their lives.  Mohtarama is definitely worth your time.

Finally #IwilldrivemycarJune15 (2018)
MEDIUM: March 8: For Many Women and Girls, It’s Just Another Day
LEADERSHIP: MY CONVERSATION WITH BIANA KOVIC
HONOR THE SUFFRAGISTS BY FIGHTING FOR WOMEN’S RIGHTS