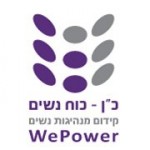 Last month, I wrote about the digital video conference that I did with the US Embassy in Tel Aviv and members of WePower (Women’s Electoral Power), an Israeli non-profit, non-partisan organization promoting women’s leadership and equality in Israel’s public and social arena. I also was able to talk with the group’s executive director, Ifat Zamir, a little more about the group’s work.

Last month, I wrote about the digital video conference that I did with the US Embassy in Tel Aviv and members of WePower (Women’s Electoral Power), an Israeli non-profit, non-partisan organization promoting women’s leadership and equality in Israel’s public and social arena. I also was able to talk with the group’s executive director, Ifat Zamir, a little more about the group’s work.

Foster: I really enjoyed speaking with your group by DVC. First, can you talk a little about the level of involvement by women in Israeli politics and political institutions?

It is no secret the women are tragically underrepresented in Israeli politics and political institutions. The numbers alone prove that there is a need for women to be promoted in major decision making roles in Israeli society. According to statistics, Women fill only 20% of Israel’s parliament (Kenesset), with only 3 women members of 30 members; 2% of mayoral positions (6 of 256) and 12% of local council representatives (376 of 3,132). Outside of politics, only 17% of Board of Directors members in publicly traded companies are women. Due to this underrepresentation of women in Israeli politics, women related issues and other social concerns do not receive adequate public attention, governmental funding or grassroots support, further reinforcing the marginalization of women in Israel.

Foster: How did WePower start and what types of programs do you conduct?

WePower was established in 2000 by our chairperson Michal Yudin in order to advance the role of women in top influential roles at the highest levels of decision-making and elected positions. We want to create a social change which will promote equality in gender and civic society. We are achieving our vision by coordinating programs and seminars that provide women with the tools to make a meaningful leadership change in Israeli society.

“The “I Want to be an MK (member of the Kenesset)”, is a nine-month leadership training program which specifically addresses the lack of women’s representation in the Knesset and is designed to advance women leaders to pursue elected office in Israel. In this program, we have carefully selected a top team of women who provide guidance to participants as they face structural and cultural challenges while they climb the political ladder. Women are educated in communications strategies, gender and leadership, the role of MK, facing the camera, etc.

“Municipal Women’s Leadership Program”, aims to break the cycle of gender mainstreaming in Israel’s leadership. The goal of this program is to significantly increase the number of women who run for and are elected to city council and mayoral positions in the 2012-2013 municipal elections. In conducting this exceptional program, we are fortunate in having the support of municipalities and councilwomen throughout the country. The objective of Municipal Women’s Leadership Program is to create a wide and stable network of women by organizing local and regional steering committees of councilwomen and public activists We also hold conferences such as “Awareness Conferences” in cities/regions throughout Israel for women activists from the area and The Annual Women’s Leadership Conference, an informative discussion to raise public awareness to women’s underrepresentation in the public arena and suggest ways to increase the number of women who will pursue public office

“Young Women for Future Leadership” is another training program aimed to build Israel’s next generation of women leaders. The program provides personal skills which will allow them to take leadership roles in the municipal arena. “Young Women” was launched in 2011 with the cooperation of the Office for the Development of the Negev and Galilee, with 10 programs in these areas. Following its success, the program will expand in 2012 to additional fifteen cities and regions throughout the country.

“The College for Women in Politics” is a collaboration with The Union of Local Authorities in Israel (ULAI) and the Authority for the Advancement of Women in the Prime Minister Office The program will be launched in May 2012 and train women who plan to run for council or mayoral positions in the upcoming municipal elections. The tailored training program will provide them with the following knowledge and skills: Devise winning strategies; Developing effective communications strategies; Writing and executing fundraising plans; Negotiation; Debate; Managing volunteers; Forging alliances; Building grassroots networks, etc.

Foster: How did you get involved in politics and WePower?

I started my career as a journalist. I earned my Bachelor’s Degree in communications from “Koterot” Journalism and Communications School and I continued with a BA in Political Science at Tel Aviv University. After finishing my degree, I initiated and managed gender and cultural projects and worked as an editor and presenter for programs such as “Israel News” and Israel Commercial Television Channel 2. In the time that I was pursuing my career as a journalist, I went back to school and earned my Master’s Degree in the Art of Movies and Gender Studies. Soon after, I studied Cultural and Art Management at Tel Aviv University. I combined my passion for politics, communications, and gender studies when I took on the role as Executive Director of WePower in 2009.

Foster: I’ve worked with women around the world, and often the biggest challenges to political office are cultural, not legal. Do you find that to be the case, and if so, how is WePower working to address those types of barriers?

-I do agree the often the biggest challenges to political office are cultural. Here is some food for thought, according to the 2011 Global Gender Gap Report (by World Economic Forum) Israel ranked 55th out of 135 countries. Our ranking has descended three places since 2010. The Global Gender Gap Index examines the gap between men and women in four fundamental categories: political empowerment, economic participation and opportunity, educational attainment, health and survival. The reasoning behind this low ranking is due to the dominance of Israel’s security discourse. The focus on the military and security creates more opportunities for men to be more influential than women in local and national politics. Therefore, women are underrepresented in decision-making positions.

WePower coordinates a variety of programs, events and conferences to provide women with the tools and leadership skills in order to be successful in the political and public arena. These programs sustain a support system and a networking platform so that women with goals of entering politics may have resources and experienced mentors to have the confidence to succeed on their own.

Foster: Despite challenges, I do see women’s involvement growing around the world. Do you see that, and are there success stories that you can share?

I do see women’s involvement growing around the world. WePower is proud to be associated with a substantial contribution to a 30% Increase in elected women in the 2008 municipal elections, and graduates of WePower’s leadership development programs were successfully elected as leaders in the public arena, such as MK Orit Zuaretz and Arad Mayor Tali Ploskov.