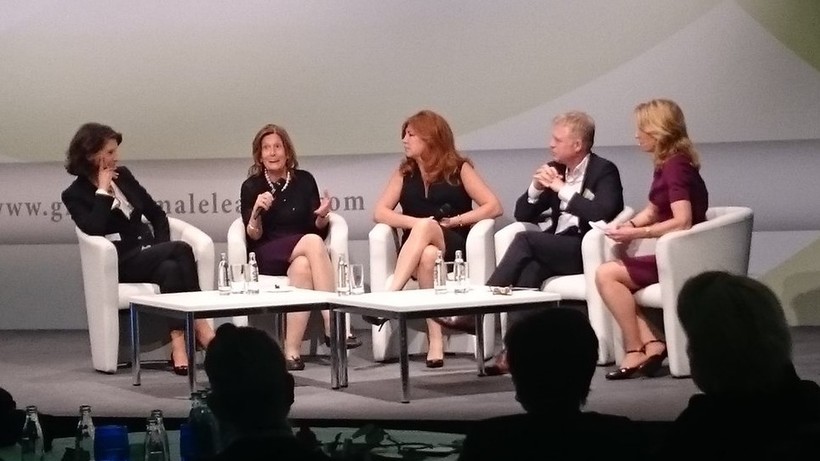 These topics were front and center at the opening session of the Global Female Leaders Summit 4.0, held in Berlin earlier this week. That conversation was the backdrop for two days of fascinating discussions about emerging trends. There were engaging presentations about the promise and impact of technological advances, including Artificial Intelligence; discoveries in life sciences; and, the importance of addressing cybersecurity. (As an aside, I learned that 3-D printers can make everything from drone parts to bionic prosthetic limbs.)

The business leaders gathered to learn from each other and strategize about how their organizations can succeed and thrive in this complex and uncertain environment. Conversations outside the meeting hall were lively and wide-ranging. One recurring topic was how to decode international political trends. As an American speaker on the opening panel, I was asked numerous times about the results of our 2016 elections, the impact of nationalism and populism, the challenges for women in leadership, and the role of the U.S. globally.

What did I hear? Concerns that recent U.S. statements across a wide range of foreign and economic policies have been unconventional and inconsistent, and that there is a lack of clarity about where the U.S. stands on trade issues (like NAFTA, transatlantic trade deals) and large global crises (like Syria and Iraq). Attendees were worried about whether the U.S. is disengaging with Europe, and were trying to better understand who the President listens to when making decisions. I was struck by the intense interest in understanding what happened in 2016 in the U.S. and elsewhere.

What did I say? America is still a global leader. When we pull back – or aren’t consistent – we leave a vacuum. That vacuum can be filled by countries and players sharing our commitment to the rule of law, democracy, human rights, women’s rights, freedom of the press, and the critical role of private enterprise and civil society. Or, by those that don’t share those values.

For those of us who are advocates of diplomacy and development assistance, we need to better communicate why these things matter. Along with our military might, we need to use our soft power to engage with the world. It’s a powerful tool. It shapes global opinion about us, it showcases who we are and what we stand for, it is a vehicle for providing needed assistance, and promoting professional, educational and cultural exchanges to further cooperation and understanding.

We spend one percent of the federal budget on diplomacy and development. These investments build stronger economies and societies abroad. We invest in education for women and girls because when women fully participate in their countries’ economies, GDP rises. (Studies show that gender parity in economic participation could add from 11 to 26 percent to global GDP by 2025. That’s an additional $12 trillion to $28 trillion in GDP, the latter reflecting the GDPs of the U.S. and China.) With more prosperity, countries are bigger economic players and better able to provide for their citizens.

With large youth bulges around the world, the U.S. invests in job skills training because a young person with a job not only brings home income, but has a bigger stake in his or her society, and is less susceptible to extremism and violence.

Government officials and business leaders – like those at the Global Female Leaders Summit – make daily decisions navigating their way in this complex world. As they make those decisions, it’s in our best interest they see the U.S. and Americans as solid partners in those efforts.