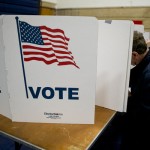 Watching the 2012 election from a far has reaffirmed so much of what I think about the US and our still imperfect political system.  On election night, I was struck by the remarkable nature of the American politics and political culture. Despite heated and partisan battles, we do (for the most part) accept the outcome and keep going, working in so many large and small ways to make our communities and our country a better place.  We strive to include more voices in decisions that get made, so that those decisions reflect the reality of everyone’s lives.  As someone who works on women and politics, I was especially pleased to see the number of women in the Senate has increased, and that New Hampshire’s congressional delegation is comprised of four women (three Democrats and one Republican), and that the state elected a woman governor.  As Americans, we need to work together to create real solutions to the problems we face, and be an example for others of what can be done if we are all part of the future.