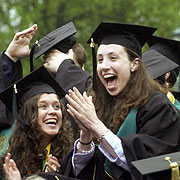 Why is this the case? This is very troubling, as it highlights that these norms around women running for office start early. As the article notes, at American Univeristy, the WOmen & Politics Institute has worked on encouraging more owmen to run for student government.

On college campuses, a gender gap in student government

More than half of George Washington Universitys 10,000 undergraduates are women. But the latest candidates for student body president were Kwasi, Joshua, Chris, Phil, Jason, Caleb and John.

Of the 57 candidates for other student offices in this months vote, 11 were women.

Its always that way, said sophomore Amanda Galonek, one of two women who ran for executive vice president against three men. There are not many of us to really rally together.

For the past decade, women have outpaced men on key measures of college success. They attend college and graduate at higher rates, according to several studies, and they tend to earn higher grades. Yet on many campuses, student government is dominated by men, echoing gender gaps in state and national politics.

The American Student Government Association estimates that 40 percent of student presidents nationwide are female, including those at community colleges. The share is believed to be lower at four-year colleges, though precise figures were unavailable.

Getting more women into campus politics in their teens and 20s, advocates say, could bolster their ranks in statehouses and on Capitol Hill. Twelve percent of governors and 17 percent of members of Congress are women.

All of the reasons why women dont run in college are the same reasons we see nationally, said Kate C. Farrar of the American Association of University Women. Women still see themselves as outsiders. They dont see themselves as already being at the table.

Farrar organizes how-to-run workshops for college women in an effort, she said, to build a new culture of who runs and who gets a voice and who gets to make decisions.

People who track student government say the gender gap is often reinforced by fraternities that vote en masse for male candidates. Sometimes, they add, women gravitate to leadership of clubs or causes more in line with their career goals instead of jumping into what they might view as a boys club.

The gender gap is especially notable at Washington area colleges because they play up their location in the nations capital to attract politically minded students.

At American University, leaders of the Women & Politics Institute discovered in 2006 that 72 percent of the student government was male even though 62 percent of students were female. The institute launched a campaign to boost the numbers, with modest success. The share of women in the undergraduate senate has been around 40 percent in recent years, the institute said.

At GWU, just a few blocks from the White House, students elected female presidents in 1998, 2007 and 2009. Women at the school have plenty of leadership ambitions at the Hatchet student newspaper, for example, about 70 percent of editors and managers are women, including the editor in chief. But women seem less enthusiastic about a student government that some critics say is too preoccupied with minutiae of bylaws and election rules.

Student Association elections, which were held March 9 and 10, are a campus spectator sport. Students are allowed to campaign for a week and sprinted to the student center at 7 a.m. on Day 1 to claim prime spots for glossy posters. There are Web sites, social media strategies and campaign staffs. There is a Joint Elections Commission with a 24-page charter that regulates posters and limits spending to $1,000 per candidate.

Its basically just a giant playground for students who want to be in Congress someday, said sophomore Phil Gardner, a presidential candidate who ran to reform the government and finished fifth.

Advocates of the student government counter that it is the first place administrators and trustees turn for student input. University President Steven Knapp regularly meets with the student president, Jason Lifton, to discuss policies and student concerns. The student leaders also oversee the distribution of $1 million in activity fees to hundreds of student groups.

Samantha Free, a junior, hesitated to seek a student government position because she was busy with clubs. But she said she ran for executive vice president because any governing body should be representative of the people it represents. She finished third but still has a shot at being included in a runoff vote next week.

Several students said that if more women ran for the lower echelons of student government, they would gain confidence and allies to run for higher office.

You would have girls pushing for other girls, just like you have guys pushing for guys, said Aria Varasteh, a junior, one of the three men running for executive vice president.

On Thursday night, as returns were being tallied, another vice presidential candidate talked about his decision to run.

Three weeks ago, I saw that there was not a real fighter in the race, so I went for it, said Ted Costigan, a junior. Theres nothing better to prepare for running in a real election than to run in one like this.

Costigans campaign manager cut off the interview because the candidate needed to mingle in the crowd as winners were announced.

Just after 10 p.m., the results for the top two races came in. No candidate took more than 40 percent of the vote, so there will be a runoff next week. Its unclear which candidates will end up on the ballot because of disputes about alleged campaign violations. (For president, it could be Chris vs. John. Or John vs. Kwasi.)

Friends hugged Free after learning that she came in third in the vice presidential contest. Galonek came in second, drawing cheers and claps. Before the announcer could reveal that Costigan placed first, the fist-pumping and bear-hugging began. Men started to chant: Ted! Ted! Ted!

MERIDIAN BLOG: Using the Justice System to Prevent Gender-Based Violence and Protect Women and Child...
Women in Stem: Critical to Innovation
MEDIUM: Women Must Be Part of the Afghan Peace Process
MERIDIAN BLOG: African Women: Leaders in the Economy and Society