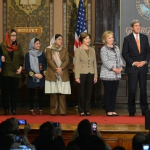 It isn’t the first time I have heard Secretary Kerry talk about the importance of women to Afghanistan’s future – but it might have been in the most beautiful venue, Gaston Hall at Georgetown University.  Secretary Kerry joined former Secretary Clinton, former First Lady Laura Bush, and many others in a bi-partisan show of support for Afghan women.

In his remarks, Secretary Kerry made a compelling case for the progress Afghanistan has made since the fall of the Taliban.  As he said:  “in 2001 …there were only 900,000 Afghan children in school, and all of them were boys. Today, nearly 8 million students are in school, and more than a third of them are girls. …In 2001, maternal mortality was 1,600 per 100,000 births; today, it’s down by 80 percent. In 2001, life expectancy for the average Afghan was 42 years; today, it’s 62 years and rising. In 2001, 9 percent of Afghans had access to basic healthcare; today, 60 percent of Afghans live within an hour of basic health services. In 2001, there was only one television station and it was owned by the government; today, there are 75 stations and … all of those but two are privately owned. And in 2001, there were virtually no cellphones in the country; today, there are 18 million covering about 90 percent of residential areas. 80 percent of Afghan women now have access to a cellphone.”   Those statistics are a good reminder of how much positive change there has been in Afghanistan in 12 short years.

At this forum focusing on Afghan women, he also stressed the critical importance of women’s involvement in the three transitions Afghanistan faces today: the political transition, the economic transition and the security transition.  He was clear that Afghan women need our support, and that the women he had met in Kabul were already making such a difference in Afghanistan’s future.   I am proud that I worked with many of the women Secretary Kerry mentioned, and with so many other Afghan women and men who are working hard to create opportunities for all Afghans.