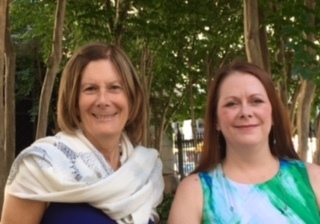 Over fifty percent of peace agreements fail within 5 years. But when women participate, agreements last anywhere from two to 15 years longer. Planning for women’s substantive engagement is fundamental to conflict resolution, mitigation and prevention. National Action Plans (NAPs) are a tool that governments can use to do just that. They make real the global commitment to women leading in peace processes, as set forth in UN Security Council Resolutions, starting with UNSCR 1325 (2000).

I recently spoke with Angelic Young, Director of National Action Plans at the Washington, DC-based Institute for Inclusive Security. Angelic is an expert on NAPs, how they work and the difference they make.

Such strategies are a roadmap, taking us from Step A – acknowledging that women are not regularly included in formal peace negotiations — to Step Z – women are leading peace processes. It’s easy to agree that women should be included in decision-making; it’s another to map out how to get there. NAPs matter because they help us understand what intermediate actions will lead to better peace and security. Many countries have committed to reducing the gender gap, but more than 90% of countries with NAPs have made progress in doing so – and that’s significant.

FOSTER: Is there a common reason governments commit to a NAP?

YOUNG: There have been several waves of NAP development, and reasons vary. Some governments do this to demonstrate their commitment to democratic governance, human rights and rule of law to the international community. Others, especially those on their second, third or even fourth NAP, prioritize these plans because they consider advancing the status of women and girls integral to foreign policy and national security. Others use them to address very specific internal challenges. There isn’t a common reason, and I think that’s a good thing. NAPs ought to be adjusted to meet the specific needs dictated by the country context.

FOSTER: What is a good example of a NAP process? What is civil society’s role?

YOUNG: When a country is on the path to a high-impact NAP, they’ve addressed six key pillars: political will; design; coordination; civil society; monitoring and evaluation; and resources.

The gold standard is a NAP that is visibly supported by key leaders throughout the government, preceded by a needs assessment and designed in collaboration with civil society. It will have a defined mechanism for how activities will be coordinated across sectors, a monitoring and evaluation strategy for tracking both short and long-term results and dedicated budget.

I’ve yet to see a NAP that consistently meets the “gold” standard across all six pillars. There are still plenty that lack budgets and strategies for monitoring and evaluation. There’s an assumption, especially in countries with outwardly focused NAPs (e.g., countries providing foreign assistance to countries or regions experiencing conflict, rather than in conflict themselves), that there’s no need for a specific line item budget. Or, that monitoring and evaluation is just too difficult. Both are dangerous assumptions, in my experience, and lead to NAPs that are under-resourced and difficult to measure.

Inclusion of civil society is vital. For the past year or so, I’ve been providing technical support to the Jordanian National Commission for Women as Jordan launches its first NAP. JNCW began by establishing a National Coalition for the Implementation of UNSCR 1325, which consists of government, military and civil society. Civil society has been integral to NAP design from the beginning, and have helped ensure that the plan has clear priorities, timeframes, accountability measures and realistic budget.

FOSTER: Why should non-conflict or post-conflict countries develop a NAP?

YOUNG: Great question, and one I hear quite frequently. Resolution 1325 is often interpreted as only applying to countries directly affected by conflict, but in fact, it applies to ANY efforts to maintain and promote peace and security. That can include daily operations of a police force in a stable country, or contributions to peacekeeping. It can include care for refugees fleeing conflict. Peace and security is a globally shared responsibility. While a NAP in a country not directly affected by conflict might look different from a NAP in a country recovering from conflict, both are vital.

FOSTER: What about the U.S. NAP?

YOUNG: I have mixed emotions about the U.S. NAP. I was at the State Department when the NAP was first developed, so I have the experience being on the inside, and appreciate how challenging it is to create a strategy for the mammoth structure that is the U.S. government.

Still, if I’m perfectly objective, there are gaps. On the plus side, the U.S. NAP aligns well with U.S. foreign policy and national security priorities. Though I wish there was a more formal mechanism (like that in Jordan), the USG regularly solicits civil society input.

On the other hand, political will is inconsistent across agencies. The USG could also do better at engaging mid-level leaders. I’ve seen this with many similar strategies; you’ll have top-level cover, so to speak, and great support at the working level – but mid-level managers aren’t as involved as they ought to be; and they are key. The USG also lacks a formal coordination mechanism – my sense (from the outside) is that coordination happens on the backs of incredibly dedicated individuals; but there’s no enduring structure.

The largest issue is that there is no line-item budget. Without this, and in my experience, it means that vital training initiatives an agency might undertake can’t happen because there’s no money. It means that there aren’t dedicated NAP focal points in every sub-organization within every agency, because there’s no money for dedicated billets. I think the USG has done a remarkable job considering the lack of resources, but it’s quite disappointing that we don’t match our public posture with actual dollars.