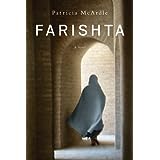 Earlier this month, I reviewed Patricia McArdle’s wonderful new book, Farishta. Farishta has won acclaim, and was named as the 2010 Amazon Breakthrough Novel in the general fiction category.

Last week, I asked Patricia some questions about her career in the Foreign Service, the challenges she faced as a woman, and the changes that she has seen over the years. Here’s what she had to say.

How did you decide to apply for the Foreign Service?

Right after graduating from the University of New Mexico, I joined the Peace Corps. Since I already spoke Spanish, I was trained in the Guarani language and sent to Paraguay for a two year stint as a health educator. I


was assigned to work alone in a remote village that had no electricity, no running water, dirt roads, and one phone shared by the entire town. In September 1972, soon after we arrived in country, our little group of volunteers was taken to the U.S. Embassy for a briefing on local politics by a young American diplomat. At the end of his presentation, he asked how many of us were going to take the Foreign Service exam in December. None of us had ever heard of this exam and it had certainly never entered our minds that we could actually become diplomats. After he explained the process, three of us filled out the applications. Several months later, on the day before the exam, the roads into my village were closed to vehicular traffic after a huge rainstorm. I borrowed a horse from a neighbor and rode twelve miles down to the main road to catch a bus. I was the only one who made it into Asuncion that year for the exam, although I didn’t pass. Following my Peace Corps service, I joined the U.S. Navy. After several more tries, I finally did pass the Foreign Service exam and joined the diplomatic corps in 1979. I was also inspired to write a short story based on that first F.S. exam in Paraguay.

During your career in the Foreign Service, were there challenges you faced as a woman and, if so, how did you deal with them?

Until 1972, female diplomats who married had to resign from the Foreign Service. When I entered in 1979, the Department of State was still a heavily male dominated institution with very few women in the senior ranks. My two years in the Peace Corps gave me some credibility with my male diplomatic colleagues, but it was my three years of service as a U.S. Naval officer in Morocco that made the biggest difference in how I was perceived. Even with my overseas experience however, it was still an uphill struggle for quite a few years to prove myself. Some female diplomats survived by becoming as tough and aggressive as the most ambitious men and for some that tactic worked. My management style developed during my four years in the Navy was firm but collaborative. In the Navy (where women in the regular officer ranks were also a new phenomenon) I found that this method, won the respect of my fellow officers and the enlisted men under my command. In the Foreign Service it eventually led to my promotion into the senior ranks of the Department of State.

What types of changes have you seen in the Foreign Services structures to accommodate women and two career couples?

The Department of State has come a long way in the last thirty years toward becoming a family-friendly workplace. Although it is still quite challenging for both male and female Foreign Service Officers to pack up their families every few years and move to a different country, structures are now in place to ease these difficult transitions. Dual postings for married Foreign Service Officers are standard. Employment for non-F.S. spouses and partners, who accompany diplomats overseas, is facilitated by U.S. embassies and consulates. Many more women are reaching the senior ranks (we’ve now had three female Secretaries of State) and the type of rank discrimination I experienced thirty years ago, simply because I was a woman, is happily a thing of the past.

If you were starting your career over, would you still choose the Foreign Service?

Absolutely. It was a fascinating career.

Are there other international institutions that you could recommend to young women who want to work overseas?

I strongly recommend two years with the Peace Corps for young women no matter what their long term career plans are. It really is ‘the toughest job you’ll ever love’ and it changed me forever. I also found my four years in the U.S. Navy to be rewarding and challenging. USAID, the U.S. Department of Agriculture and the U.S. Department of Commerce all have Foreign Service components. Many U.S. companies have offices overseas, although most now hire locals to run those offices. There are also many private volunteer activities for those willing to go overseas without the kind of safety net provided by the U.S. government or large corporations. I urge any young women who want to work overseas to start studying one or even two foreign languages as early as possible.