by Stephenie Foster | Nov 9, 2017 | Featured Posts, In the News, Women in Technology 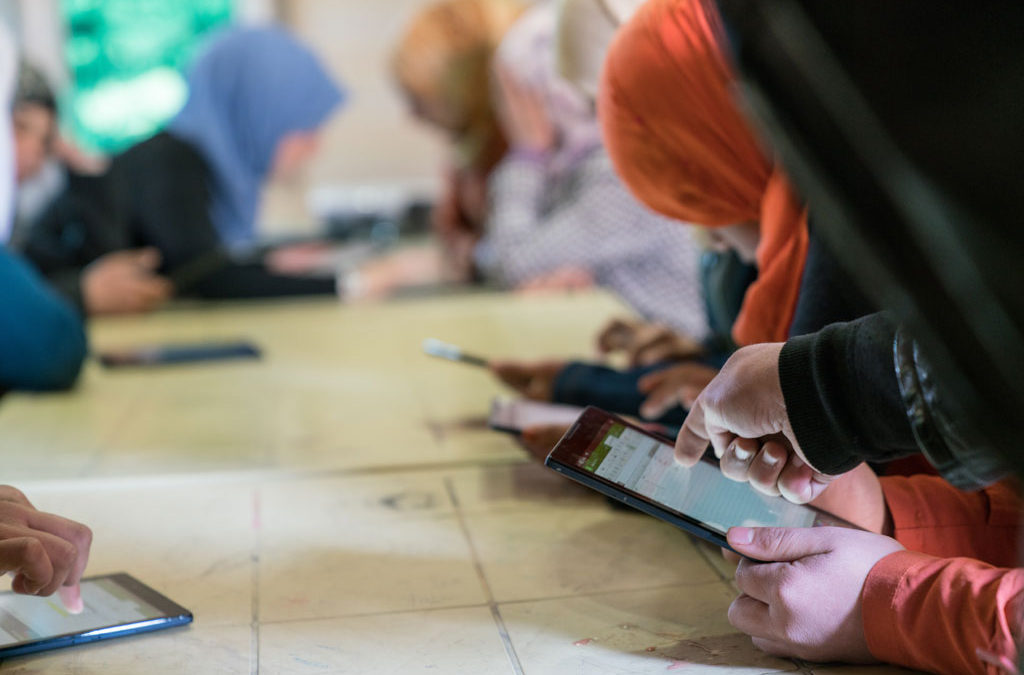 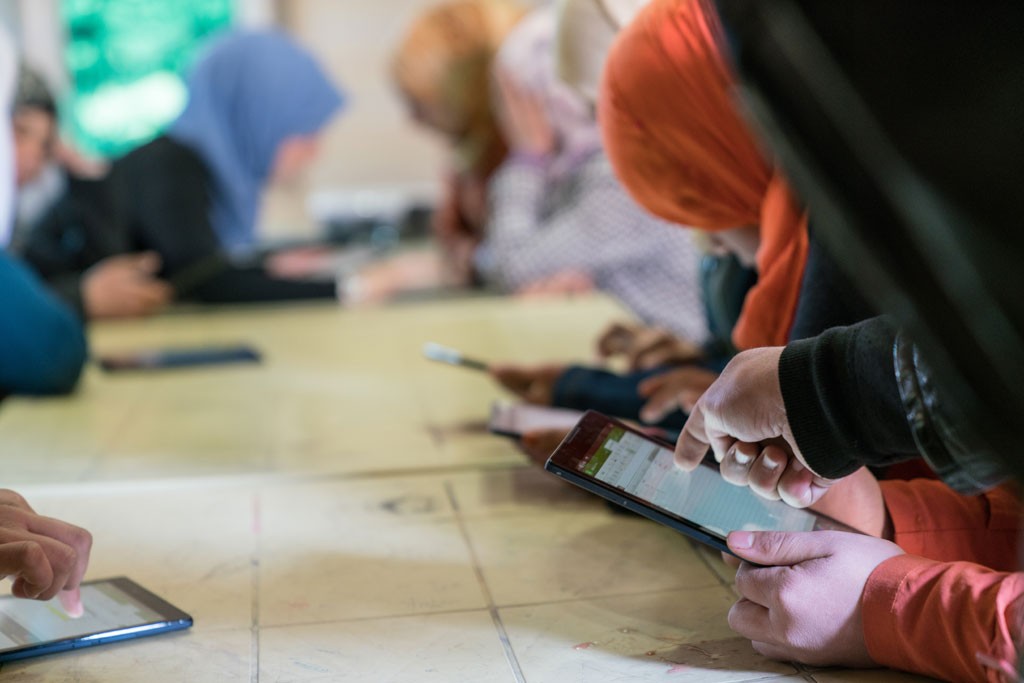 As governments struggle to find solutions a growing global refugee crisis, the technology industry has found a place to step in with solutions. But too often, the gender gap in access to technology that is accentuated by refugee environments is overlooked.

Only 10 percent of those who migrate across borders to escape poverty, conflict, or other destruction are refugees, but “only 10 percent” means 21 million people. Of these 21 million people, 53 percent come from just three countries: Syria (4.9 million), Afghanistan (2.7 million), and Somalia (1.1 million). The countries hosting the most refugees are Turkey, Pakistan, Lebanon, Iran, Ethiopia, and Jordan. (TheRefugeeProject.org maps refugee flows from 1975 to 2015.)

A common view is that refugees live in crowded and sprawling refugee camps, but half live in urban areas, and depending on where they live, can have different experiences and needs. As refugees, women and girls of all ages are disproportionately at risk, subject to extreme poverty, often with poor or no access to basic services or means to support themselves, and at tremendous risk of violence.

By including women, and especially women refugees, at the table when designing tech solutions, the gaps in access to technology for female refugees can be bridged. Several interventions that can work have already been identified, and the key principles involved should provide the foundation for further work done by governments, NGOs, and refugees themselves, to ensure equal access to technology.

A LIFELINE FOR REFUGEES

For all refugees, technology can be a lifeline for getting accurate news reports and information about services, for keeping in contact with family and friends, and for finding information regarding migration routes. Refugees are overwhelmingly dependent on cell phones, smartphones, wi-fi hotspots, and other technologies for these needs. The Office of the United Nations High Commissioner for Refugees (UNHCR) and Penn State University found that 86 percent of young people interviewed in Jordan’s Al-Zaatari refugee camp owned a mobile device, and over half use the internet daily. Free applications are used widely, but refugees can spend a third of their disposable income on staying connected.

Apps have been developed for everything from translation services to camp navigation. Google, ThoughtWorks, and UNHCR developed an app so humanitarian workers can better communicate with refugees by translating key phrases. The ReDI School of Digital Integration works with refugees and asylum seekers in Germany to develop platforms to assist newcomers better navigate their new situation. One such platform is Dalili, a search aggregator that helps newcomers connect with organizations providing services. Last year, Google helped fund pop-up schools in Lebanese refugee camps that had laptops pre-loaded with teaching materials. Technology is also being used to provide energy and lighting via solar driven lamps, and more portable and secure banking.

Not surprisingly, women and girls in refugee settings have less access to technology than men and boys. Fewer funds, less mobility, and more family responsibility are factors that impact this access. Women are often forced to choose between basic needs and cell phones. Further, adolescent and younger girls have different needs across humanitarian crises, and it is important to understand those distinct needs as technological applications for refugees are being developed and utilized.

Researchers at al-Zaatari camp found that male and female refugees use cell phones differently. Men more often had phones in family groups. Young men used cellphones to communicate, while younger unmarried women used them instead for photographs or games, which some said mirrored practices from Syria. Elderly women relied on their sons or grandsons to keep in touch with relatives and friends. As a corollary, less mobile residents of the camp, including the elderly and unmarried women, were less connected to camp information.

Further, adolescent girls, who account for an increasing proportion of displaced persons, are at fragile points in their lives. The roles and responsibilities that adolescent girls assume during crises can be isolating, thrusting them into adult roles much too young and leaving them vulnerable to exploitation, abuse, and violence. Compared to their male peers or to adults, adolescent girls lack the information, skills, and capacities to navigate upheaval following displacement. Simply put, it is harder for adolescent girls to access life-saving resources, information, and social networks, including technology.

EFFORTS TO ADDRESS THE GENDER GAP

There are many challenges to developing usable and relevant technology to meet the needs of female refugees, who comprise a diverse population spread across multiple continents and with context-specific needs. Programs like hackathons can develop effective interventions by including refugees in the design of apps and other technology to assist women and girls.

Techfugees is a global effort to coordinate the tech community’s response to the needs of refugees, using conferences, workshops, and hackathons to generate tech solutions for and with refugees. Techfugees has over 15,000 volunteers from the technology community and chapters in approximately 30 countries on five continents. It works with refugees to address challenges in five issue areas: (1) infrastructure and access to technology; (2) access to education; (3) identity and credentialing issues; (4) access to health services and (5) economic inclusion and integration.

For example, Techfugees recently hosted a hackathon in Jordan, in partnership with local tech partners. Refugees in Jordan identified three main challenges as a focus for the hackathon: first, water leakages that lead to excessive waste and tensions between host communities and refugees; second, a wide educational gap between male and female adolescents; and third, high unemployment rates. Over the course of a weekend, 12 teams of mostly young refugees from Iraq and Syria created innovative ideas and prototypes with intensive mentoring and support.

Techfugees also has a publicly available “hackpad,” which catalogues projects that need assistance. There is one focused on addressing violence against refugee women, and another focused on education for refugee children.

EmpowerHack has developed applications to assist women and children in refugee settings, using collaborative design to include those who will use the app in its creation. Some examples of projects in process or being implemented by EmpowerHack are:

Another hackathon addressing issues relevant to women refugees was a UN Women hackathon on identity issues held in Oslo in May, bringing together experts in online identity and blockchain as well as NGO representatives to work toward solutions that support women refugees.

Some projects that came out of that provide education and services to refugees. Row3d.org is such a platform, supporting STEAM (science, tech, engineering, arts, math) education projects like the one that serves Syrian women and children refugees with severe traumatic injuries, including amputations and paralysis. ROW and 3Dmena implemented a STEAM education/social innovation lab at the Al-Bader Center, with the goal to strengthen children’s self-reliance by enabling them to develop solutions for daily problems, including fixes to their prosthetics and assistive devices.

One challenge is that interventions – such as those described above – usually only reach a small number of refugees. Identifying interventions that work, and that can be expanded can be difficult. As governments, international organizations, NGOs, and refugees continue to develop technology solutions, these principles can help guide the work to ensure that the needs of women of all ages are addressed:

Photo: UNICEF/Christopher Herwig. In Jordan, adolescent girls use cellphones and tablets in a solar kiosk providing internet connectivity in the Za’atari camp for Syrian refugees, near the Syrian border.

MEDIUM Blog: Walking the Walk on Diversity, Inclusion and Accountability: Beyond #MeToo
Data, Gender & Philanthropy: Giving with Impact
LEADERSHIP: MY CONVERSATION WITH BIANA KOVIC
MEDIUM: March 8: For Many Women and Girls, It’s Just Another Day